How I Became Bank CEO At 34 -Tony Elumelu

Group Director for Marketing and Corporate communications at the United Bank for Africa(UBA), Executive Producer of REDTV and CEO of the UBA Foundation, Bola Atta has emerged, Outstanding Corporate Communications Personality of the decade at the just concluded 8th edition of Marketing Edge Annual National Marketing Summit of Brands & Advertising Excellence Awards.

The awards ceremony which celebrates excellence in Nigeria’s Integrated Marketing Communications industry attracted the very best of the Advertising world across Nigeria. The award is in recognition of her commitment to excellence and the positioning of UBA as a foremost pan African Bank. RECOMMENDED ARTICLES

Her dedication to improving lives through her role as the CEO of the UBA Foundation, which has for many years, been impacting the lives of many through the foundation’s scholarship grants and other initiatives, also played a role in her being selected above her peers to receive this award.

Bola Atta who graduated from the University of Sussex with a Bachelor’s degree in Economics and an M.B.A, in Marketing at Duquesne University qualified as the nominee for the prize as a result of her impressive contributions at the steer of UBA’s corporate communications with various laudable initiatives that have further increased the bank’s market share and brand presence.

Atta’s intimidating profile also includes but not limited to her production of several award winning series for REDTV, the online network which is powered by UBA and home to hit web series like The Men’s Club and Inspector K. 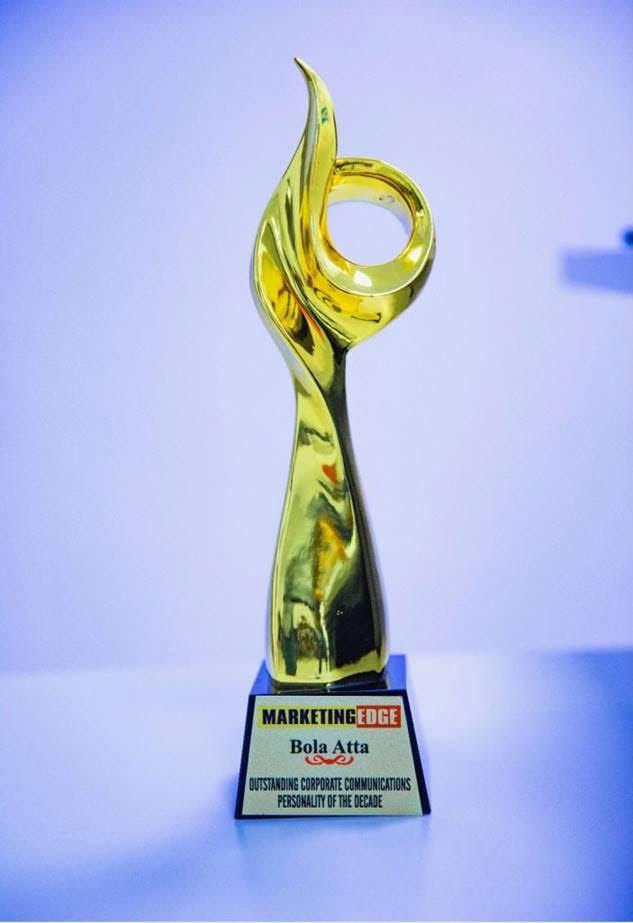 It can safely be said that she has been able to replicate what she did with the Africa Magic channel, putting REDTV at the forefront of online entertainment, in a short period of time.

Speaking on the award, she wrote on her Linkedin page: “I have always loved doing what I do and my objective has never been acclaim or recognition. It’s the milestones; the changing lives! Therein lies the fulfilment.

“However, it is nice sometimes to receive an award especially from a highly reputable source. Grateful for the award as the Outstanding Corporate Communications Personality of the Decade. Wow! Thank you Marketing Edge!”

Atta showed appreciation for the award saying that in her position as the Group Head of Communications at UBA she has to keep innovating and stay ahead of the ever changing creative landscape.

‘At UBA I have grown a lot through the diversity and sheer size of the pan-African establishment. There are so many exciting tasks within the group, that you are constantly challenging yourself to get better’.Bola Atta shines again, emerges Outstanding Corporate Communications ‘Personality of the Decade’

Bola Atta has been the recipient of various awards and recognitions for her work. She was named as one of the 40 top Nigerians under 40 in 2008, listed as one of the 100 most influential women in Nigeria in March 2015 and was crowned Best Marketing professional in West Africa in 2017.

She more recently, received the honour from MIPAD as one of the world’s most influential 100 creatives of African descent for 2021.

“I Built My Page With My Nyash. I Will Shake It Forever,” Instagram Influencer, Janemena

Nigerian dancer and Instagram influencer Usiwo Orezimena Jane, popularly known as Janemena, has revealed that she built her social media...

Mrs Abiola Bawuah United Bank for Africa has announced the appointment of her first female Chief Executive Officer (CEO). The Board of Directors of the...

Actress, Destiny Etiko Buys An Expensive Car For Her Boyfriend

Meet The Tallest Woman In The World

Turkey's Rumeysa Gelgi has been named as the tallest woman living by Guinness World Records she stands at 215.16cm (7ft...

Photography, Arts and Design Exhibition (PADE) by ECOBANK holding live at the Ecobank Pan African Centre (EPAC) was conceived to...